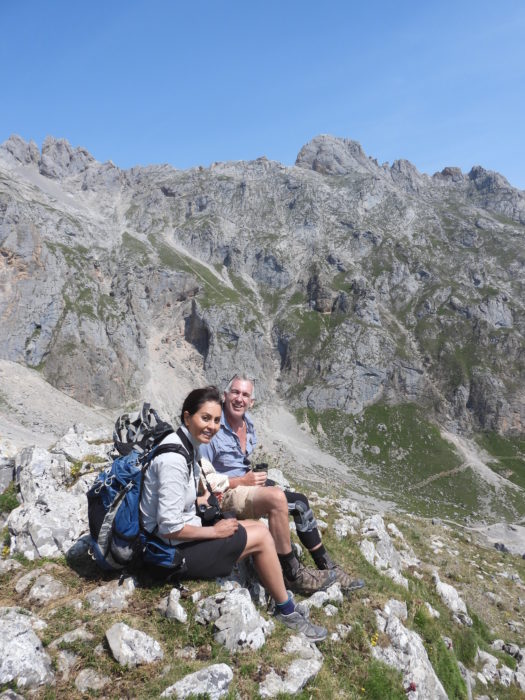 Interestingly in 2020 I was only able to guide a group of English visitors for wildcat watching in the Navarre Pyrenees at the beginning of March, as after that came the first quarantine.

Fortunately, during the late summer of 2021 there was an upturn of foreign visitors traveling to Spain and I was able to guide a total of seventy days until the end of the year.

The season started with a couple from Austria where we spent a week between the Asturian coast and mountains, where we toured around Llanes, looking for birds, taking pictures and enjoying the fantastic views as you can see in the photos. The star of the trip were the numerous pairs of peregrine falcons nesting on the coast.

Later a couple from England came to spend three days with me in Picos de Europa, staying in Tudes, an interesting village in Liébana. On the first day we visited the impressive central limestone massif of the Picos de Europa, climbing thanks to the use of the Fuente Dé cable car. There we had the great fortune to be able to see the wallcreeper, snowfinch, yellow-billed chough, alpine accentor, water pipit and northern wheatear in one morning. The visitor was really happy because he finally accomplished to see the spectacular wallcreeper after 40 years looking forward to watch it. These are undoubtedly the most interesting birds to see in the area, to which can be added surprising birds of prey. In our case we were lucky enough to see the wise vulture, the Egyptian vulture. Afterwards we continued down through the Chalet Real de Aliva, and then down through Iguerdi back through the forest to the parking lot, completing this fantastic circular route in Cantabria.

The next day the weather forecast was rainy, so we went south, to the border with Palencia at the Piedrasluengas viewpoint, from where we headed towards the Puerto de Sierra Albas, following the track through different types of habitats such as heathland, mountain grassland or fantastic beech forests and of course with a sea of clouds at our feet. Among other things we were fortunate to be able to see an impressive flight of golden eagles, which are usually found in the vicinity of the nearby Caloca.

To complement the visit by providing a more Mediterranean view we went to visit the Puerto de San Glorio in León. There the landscape, despite being very close, has a very different character with a conglomerate type rock and very sparse vegetation, with fewer tourists and perhaps more livestock. As impressive birds we were able to enjoy the abundant presence of the red-backed shrike and the striking cirl bunting and yellowhammer. In addition, we were fortunate to witness a real natural spectacle, as there was a dead horse and a large number of griffon vultures approached to eat it, showing the spectacular interactions between them.

HIKING IN THE PICOS DE EUROPA

A few days later in the summer a group of ten Dutch people came for a hiking and meditation activity, with the added attraction of sleeping in the mountains in a tent. As the weather forecast was calling for heavy storms, I decided to modify the route for greater safety. Therefore we started climbing from the end of the Cares route in Cain, where we saw the impressive wallcreeper, and then we continued through the Monte Corona to Posada de Valdeón and from there by the old road to sleep at the fantastic camping Cares in Santa Marina de Valdeón, in the Picos de Europa in León.

The next day we walked down from the campsite to Soto de Valdeón, where we briefly visited the local mountaineering legend Isidoro Rodríguez Cubillas, to continue climbing to the Frade ridge, just when the fog closed all the views. Already with dense fog and some rain, we descended through the enigmatic beech forests to the charismatic mountain refuge of Vegabaño, where we had dinner and spent the night in the rain in our tents. The next day with sun we got down and we could even contemplate a male wild cat and arrive just in time to bathe in the Dobra River before lunch and go.

At the end of August and closer to home, in Bilbao, I spent several days with both American couples with whom we went to visit the Urdaibai marshes in Bizkaia, the Txakoli Berroja wine cellars, and even the alpine Urkiola Natural Park. We were fortunate to see a group of about thirty Spoonbills flying in the vicinity of San Cristobal, something spectacular that can only be seen in those important moments during the migration at the end of the summer. We completed the trip by visiting the Urdaibai Bird Center and its lagoon and of course we did not leave without tasting the delicious Basque Pintxos in Gernika, and checking out the Casa de Juntas, and the mural replica painting by Picasso. This is something that Americans are very excited about.

Late September began for me the most important time for brown bear watching in the northwest of Spain. On this occasion I first shared five days with a couple from England, then six days with a person from Germany, and then four days with another couple from England. In all cases we were able to visit mainly the Natural Park of Somiedo, the neighboring and impressive valley of Teverga and also in some of these trips we visited briefly the Eastern Mountain of Leon.

At the beginning the chances of seeing bears were quite high, but as we know they are free-ranging animals that depend directly on food sources. As the season progresses, the food sources change from blueberries, blackberries, and hazelnuts to apples, acorns, beechnuts and chestnuts. The food is found in the higher parts at the beginning, and then latter in the lower parts, generally inside the forest, therefore, at the beginning it is much easier to see the bears, but as the season progresses from October onwards, the bears are already introduced into the forest and it is really difficult to see them. In spite of this, and thanks to our persistence and constant search effort, we were able to see them on every occasion. Perhaps the most impressive bear sighting from Gua in Somiedo, was that of a mother and her two cubs at the top of the cliff. The same where in an unprecedented and absolutely exclusive way we heard and observed at dusk an adult wolf howling from the crest of the mountain, which we could see and photograph as seen here, certainly a dream come true that happens few times in life.

Paradoxically and fortunately, Wildcats are looking really good this year, with great viewing opportunities in the Riaño area, and even in the nearby Palentina mountains. I understand that they are closely linked to the possible abundance of rodents, which is their main prey when they eat in the fields near the road at the end of the summer. It also seems that these animals are very cyclical, since for example the two previous years it was really difficult to see a single cat. It is certainly a pleasure to watch them so well.

A trip that I was very interested in was the one week guided tour of a group from the UK in Andalusia, specifically in the Natural Park of Andujar and in the National Park of Doñana, of course for the observation of the Iberian Lynx. Although we made a great effort, we had no luck in Andujar, but we were able to enjoy good sightings of Iberian Imperial Eagle and something that for me interestingly was a new species, an Eagle Owl. Curiously, it was the first time I could see this huge nocturnal raptor, but it was for a few seconds, so I hope to have a longer observation in the future. In Doñana, which was quite dry by the way, we were able to see a mother and her cub of Iberian Lynx in the Raya real, but unfortunately it was also for a glimpse, leaving me also wanting to return another time to try to observe this exciting species of feline.

Later in autumn, I guided numerous groups in one of my favorite areas of Spain, La Montaña Palentina, a very quiet place with a great potential for nature. In these five-day trips with visitors from the UK, we prioritize above all the observation of the numerous and interesting mammals found in the areas near Cervera de Pisuerga, where the emblematic Iberian wolf stands out in addition to the wildcat itself. Of course, it is also a good place for bird watching, although autumn is not the best time, we were fortunate to be able to hear and briefly observe the appreciated middle spotted woodpecker, within those oak groves trees. All this fauna is of course well accompanied by excellent local cuisine, and the impressive Romanesque churches.

It has certainly been an intense autumn in terms of guiding, with a total of 70 days guided to numerous foreign visitors who have enjoyed some of the best places in Spain, accompanied by a specialized guide, me Pablo. Let’s hope that 2022 will be at least as good. We will continue to offer hiking routes and nature observation and interpretation in Spain.